Working on spaces for dance

As an office we have been fortunate to be working on projects for individuals associated with Dance and movements.
It wasn’t a conscious attempt but as it panned out, various interesting projects of the same genre has come our way. The experiences have been quite interesting as we believe Architecture or rather space is closely connected with our body and movement. One can also say that the body reacts to the space through its movements. The idea of the building as a living body is also widely acknowledged, portraying the relationship between the inhabitant and the building becomes similar to that of two living beings. It’s been our good fortune that one of the first projects that we handled was a small practice space in Natanakairali, Iringalakuda for Venu G. A very small project in size, but it allowed us to have an overview about Koodiyattom and other performing arts. After the completion of the project we were privileged to have received a Ponnada from the legendary Koodiyattom Maestro late Ammanur Madhava Chakyar.
The connection with Kalari also has been quite long. Again just by sheer chance or luck, Lakshmanan Gurukkal of Kalarigram, Pondicherry, has been a longtime friend and we have connected to the space, contributing and learning in any way possible, big or small.
Another space that we have been involved in, Thanjavur Amma Veedu in Trivandrum, built by Maharaja Swati Thirunal for his wife Sundaralakshmi from Thanjavur. It’s blessed to have been one of the pioneering spaces for Mohiniyattom. We had developed a proposal/ conservation strategy for the space which is yet to be fully implemented. We also had the opportunity to work on a dance performance by a friend Santaa Ratii in the beautiful Naalukettu space.
And yet another design that we worked on was when a dancer from Palakkad, Methil Devika, approached us to create her studio in Palakkad, called Sripada. The studio is used as a practice space and to teach her students. We wanted it to be a tranquil space in communion with the trees and nature around. The project had had us travelling to Palakkad once a week for almost a year. It also won the state IIA award whilst becoming a great opportunity for us to learn and understand more dance. Similarly few years back, a dancer from Irinjalakuda, Sangeetha Rajesh, too had approached us to create a dance space. This was also a personal space of sorts for teaching and hosting small events. We worked with 4 small courts in the space, which allowed the rays of light to seep through and create naturally lit space within. The project was completed with the help and work of various craftsmen including oxide workers.
Finally, the opportunity to work on the restoration of Guruvayur Koothambalam came to us as we completed the Bhagavathy temple work in Guruvayur. It is a most sacred space, said to have been the where Krishna appeared before Manaveda, the Zamorin of Calicut. The project won UNESCO laurels.
We consider it a rare opportunity for us to have been able to work with many artists defining movement. This has definitely helped us in improving our understanding of space and its connections with the Indian art forms, inspiring us to learn more about the same. 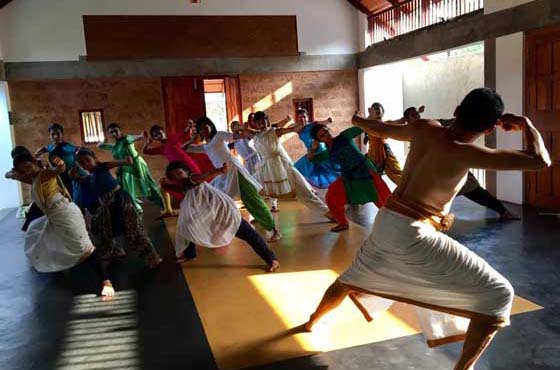 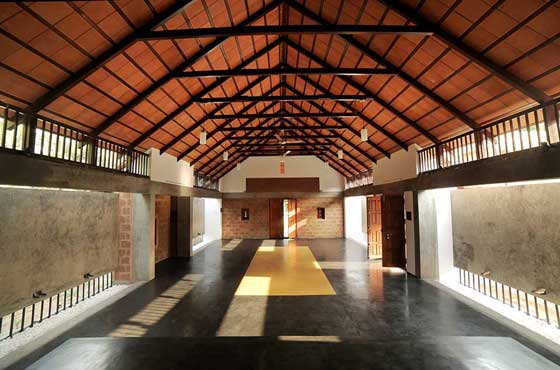